The gaps between theory and practice interest me, the oft dismissed space where “lore” as Stephen North terms it, fills the gap. Partly, these gaps are fascinating because I started my academic career purely as a teacher, not a scholar. I grew up playing teacher, asking for chalkboards and curricula for Christmas. I always intended to teach elementary school, but then discovered the depth of English curricula in college and switched to the only teaching job that allowed me to keep concurrently study the subject I taught. I also had two small children and the limited time I had was dedicated to the pragmatics of what I’d teach and, thus, teaching became my primary concern. It wasn’t until after a few years of teaching that I started searching for more, an anchor or framework of some sort to help me choose lessons and projects. There was no PD to speak of (at any of the schools I taught for, except UCCS, with Dr. Deb Dew), so I just began browsing individually. That early browsing is what led me to apply for doctoral work, really.

Now, as I’m trying to find more solid theoretically-informed footing, I’m a teacher who works with other teacher. So, I’m not just searching a framework for myself, but inviting others to begin their own search. I help train new TAs and provide PD for current instructors. In this role, I have to be highly aware of the theory that does (and the theory that does not) do much for decisions about classroom practice (at least for new scholars/teachers), weeding out theory that isn’t even nearly translatable and pragmatic (because the instructors in our department are, like most others, have the best of intentions, but are deeply overwhelmed). So much theory has no perceptible relationship to the practice of teaching writing. I mean no disrespect to those w

ho have constructed theoretical taxonomies, but the praxis (I think of praxis as the meeting of theory and practice) feels out of reach and not reflective of the lived experiences of teaching composition.

Maybe because of that purview, I take a particular interest in ethnographic methodologies. They’re specific. They’re often narrative-based, there’s no effort to hide ideologies. They’re personal, and often immediately relatable to my own professional experience.

Ethnography is particularly interesting, in that it’s really controversial. Because ethnography can be rooted in narrative, I trend to trust its depth, its admitted limitations and its lack of pretense of objectivity. But I may be an outlier.

Taber asks about the value of ethnography in the field in his dissertation—a close analysis to determine whether composition studies has any better idea what ethnography is in the field than we did in 1987 when North warned of its limitations. Ultimately, he finds that institutional pressure has pushed ethnography into the mainstream of composition studies. He finds that this “alternative academic discourse is an “amalgam of methodologies…for the practitioner largely in response to institutional pressure to publish generalizable, positivistic knowledge” (41). He’s claiming that practitioner (I identify primarily as such) is reacting to the pressure of lauded methodologies that don’t suit the research context or subject that matters most: students and instructors who often focus on the practical. Tabor warns that this concession is rife with “rhetorical ambiguity at best and falsely generalizable terminology at worst” (41). He’s not a fan of ethnography. I’m tempted to challenge him on that front.

In fact, any approach to research that is ground-up is of interest to me. The micro vs. the macro. The local vs. the global. The macro and the global also in

terest me, but the typical methodologies for constituting the global seem highly flawed and superficial, rarely shifting praxis, rarely inviting voices from beyond the tenure track (though claiming to speak for NTTF).

However, those are the voices that still dominate the field. Theory is still the institutional favorite and is still considered dominant to the social constructivist approach that values the singular stories. This makes some sense, considering the long and painful journey to establish Rhetoric-Composition as a legitimate field. As Taber references, Rhetoric-Composition sought primarily to establish its credibility (before and during the 60s) with approaches to methods and theories that took cues from positivist-oriented fields. For example, linguistics for some time helped legitimize Composition by turning to the science of language.

I see movement, though. I see now a field that has found a little anchoring and seeks instead to find individuality and reaches into less obvious alternative methods. For example, I’m similarly interested in the work of Doug Hesse (who works just a few miles from me and is delightful in person as he is on the page). In 2010, he wrote “The Place of Creative Writing in Composition Studies” and has not only written about creative nonfiction in the field (see Creating Nonfiction: A Guide and Anthology), but has contributed to the body of CNF scholarship himself.

Here’s the common denominator: the attempt to make accessible that which has otherwise sought to exclude is a powerful reminder of what’s possible. In this article, he ponders what creative writing has to offer composition studies and the items are many, partly about the importance of disciplinary unity (34), but more than that….widening the purview of the types of writing that suit particular rhetorical situations more honestly, in much the same way that I think multimodal pedagogies seek to represent modes of meaning-making more honestly (34-35).

Hesse, Doug. “The Place of Creative Writing in Composition Studies.”

Taber, Michael W. “I know I shouldn’t generalize, but–: A rhetorical critique of ethnography in composition studies.” Taken from: Scholar Commons, University of South Florida, 2010. 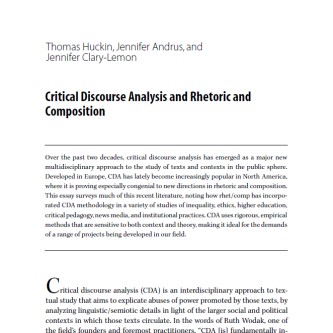 Critical Discourse Analysis is a methodology suitable for interdisciplinary textual study, most notably designed to recognize power—especially abuses of power—as promoted by texts. As Wodak notes, “CDA is fundamentally interested in analyzing opaque as well as transparent structural relationships of dominance, discrimination, power and control when those are manifest in language” (qtd. in Huckin et al., p. 107). So, discourse analysis seeks to make explicit the ideologies that govern text and impact culture with several distinctive principles: address social problems, notes that power relations are discursive, that discourse constitutes culture, that discourse does ideological work and is historical, interpretive and explanatory and a form of social action (p. 108).

Huckin et al. note three points of emphasis that CDA offers the field of Rhetoric-Composition that no other methodology can:

Ultimately, CDA is an excellent methodological basis for ethnographic study without sacrificing theory or practice (112), providing a marriage of sorts for text and context (111).

Huckin et al. go on to examine in depth the places where CDA and Writing Studies (or, Rhetoric-Composition) most naturally overlap:

Also, the benefits of CDA and Rhetoric-Composition collaboration are enumerated in terms of mutual benefits as a method of archival research as it pertains to: (1) Intertextuality and recontextualization (i.e. the ways “old texts affect new contexts,” 120) and (2) multimodality (CDA has broadened to include multimodal communication, noted as MDA in other scholarship).

Rhetoric & Composition has a long tradition of looking outside its own field for methodologies suitable to their objects of study, termed “methodological pluralism” by Gesa Kirsch and Patricia A. Sullivan in 1992. Ethnography is one such methodology gently borrowed from Anthropology. We’ve all seen ethnography as a notable approach to research in education as a means of narrowing in on a subject, admitting subjectivity, and understanding the complex nature of human action. My interest, though, is in adaptations to the ethnographic method, as used within the field, for distinct purpose. LaFrance and Nicolas’ text provided that adaptation, with institutional ethnography.

Institutional ethnography (IE) was a methodology developed by a Canadian sociologist, Dorothy Smith, to seek to understand the ways that institutions organize people and experiences (130-131). This methodology, sensitive to context and practice (two key concerns of rhetoric-composition, 142), includes examination of the practices that make up an institution, the discourse that shapes those practices, and how the norms converge to illustrate the institution. The attention is placed not on a site, per se, but on the ways people within that site co-create the space.

There is a focus on the micro to understand the macro in a research methodology like this and I appreciate the ground-up approach. IE takes into account the “situated variability of experience within institutions” (133). In fact, IE asks ethnographers to focus on “individuals to understand their personal experiences as uniquely responsive to the social organization of institutions” (134), rather than generalizable on a large scale. Rather than applying general theories of professional development, for example, LaFrance and Nicolas advocate looking microscopically at the culture of professional development already in existence in that particular context. In an effort to exemplify their application of IE, LaFrance and Nicolas discuss their research on the local discursive practices of professionals in their department, harkening directly back to the benefits of CDA (in PAB post, above).

According to LaFrance and Nicolas, this approach is influenced by feminist and Marxist methodologies in that it is personal, context-dependent, and reflective of an “embodied nature of knowing” (134). This approach strikes me as highly situated within social constructivist–  allowing, in my opinion, for a more responsible approach to understanding human behaviors in context.

LaFrance and Nicolas use IE to examine how the university and the concept of professional development is realized by separate faculty in their department (the Writing Center director, the Assistant WC Director, and an Associate Professor with a scholarly interesting in WC research and practice), though the purpose of their article is to explicate the methodology, using their own research as a model for specific examples.